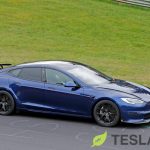 Tesla’s insane Model S Plaid active spoiler has been spotted at the Nürburgring racetrack in Germany. Tesla has been attempting to break its own lap record at the raceway, which it set on September 9th.

Teslarati caught exclusive photos of the Model S Plaid’s active spoiler at the Ring earlier today. Tesla has been at the Nürburgring since August, testing and pushing the limits of the Model S Plaid, the world’s fastest production vehicle. CEO Elon Musk confirmed on September 9th that the Model S Plaid had officially broken the record at the track, nicknamed the Green Hell due to its treacherous course surrounded by thick forestry, with a time of 7:30.909. The vehicle used to set that time was unmodified and was shipped directly to Germany from Tesla’s Fremont factory.

On the Model S spotted by Teslarati earlier today is an active rear spoiler, which improves aerodynamic performance, including downforce in corners and speed. The spoiler can be adjusted to different angles, allowing the car to run with variable settings to see which would be best for a high-speed run.

Tesla was testing three Model S Plaid units in total: Deep Blue Metallic with the active spoiler and one Red Multi-Coat and a Solid Black. The Red and Black Model S Plaids spotted at the track were not fitted with the active spoiler. Additionally, the Blue and Red Model S Plaid units were also equipped with drilled brakes, allowing harder and faster braking, fitting for a performance setting. Tesla is likely benchmarking the Model S Plaids against one another to see which modifications are providing the most improvements in speed, braking, downforce, and aerodynamics. This will give Tesla the most effective data in determining which settings will create the fastest car.

In typical Tesla fashion, the company is not satisfied with just holding a record. It is constantly looking to improve upon perfection, especially when some of the world’s most renowned automakers are frequently at the Nürburgring looking to break speed records and lap times. While the Model S Plaid in stock form holds the track record at the raceway, competitors will have an even more difficult time catching up to Tesla as it has brought modifications that could be a part of an aforementioned “Track Pack” to Germany to drive in its domination even further.

Tesla CEO Elon Musk stated just after the record-setting run at the Ring in September that the automaker would be modifying a Plaid Model S for future runs. Musk said, “Next will be modified Plaid with added aero surfaces, carbon brakes & track tires (all things that can be done without Tesla being in the loop.” Musk was likely referring to the active spoiler and the noticeable front splitter when mentioning added aero surfaces. Brakes and track tires are also being equipped by Tesla here to improve performance.

The Tesla active spoiler on the Model S Plaid was first spotted in May 2021 while the company was testing multiple vehicle units at the Laguna Seca Raceway in California.