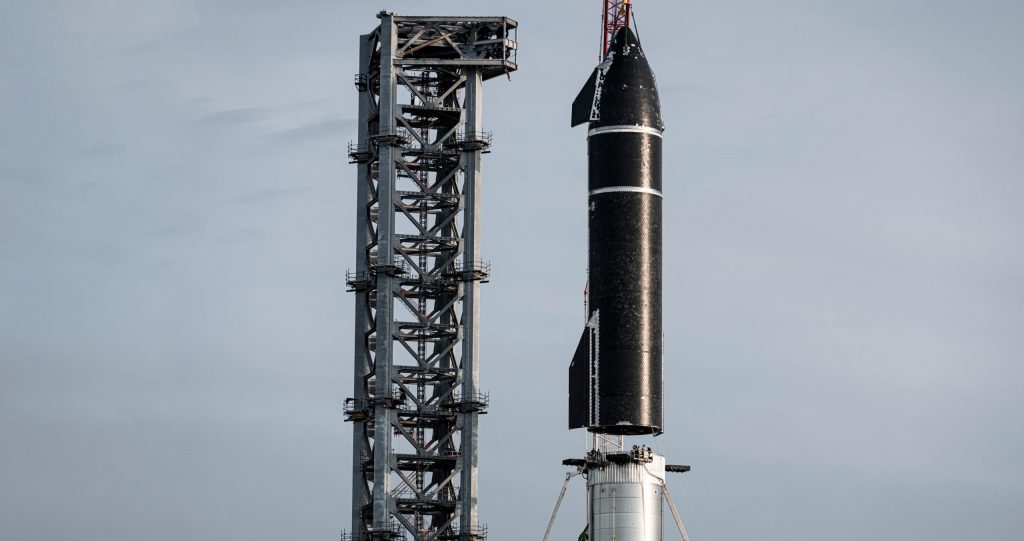 SpaceX appears to have installed a full set of car-sized grid fins on Starship’s second flightworthy Super Heavy booster, leaving the massive rocket just a few steps away from completion.

Measuring ~69m (~225 ft) tall and 9m (~30 ft) wide, Super Heavy Booster 5 (B5) – like B4 before it – will be one of two of the largest rocket boosters ever built once completed. In broad strokes, Super Heavy B4 and B5 are the same. Aside from near-identical dimensions, both have been built to hold up to 29 Raptor engines while Starbase has already begun receiving parts of the first 33-engine Super Heavy. That means that Booster 4 and 5 – while both potentially capable of flight – are also pathfinders for an upgraded version of Super Heavy with similar dimensions but the potential to produce more than 40% more thrust once Raptor 2 production takes over.

While more similar than not, there are significant differences between SpaceX’s first and second flightworthy Super Heavy boosters.

The biggest visible differences are tweaks SpaceX has made to the Super Heavy assembly process. Booster 4 was assembled out of mostly naked steel rings and only had thousands of feet of external plumbing, wiring, raceways, and hardware installed after it was stacked to its full height. That may partially be because CEO Elon Musk had ordered SpaceX to complete the first full-height Starship stack by early August, requiring the build team to prioritize speed above all else.

Regardless, SpaceX appears to be outfitting Super Heavy Booster 5’s exterior before and during the process of stacking the booster to its final height. Most sections of 3-4 steel rings have had partial plumbing and raceways preinstalled, meaning that Booster 5 will be far closer to test readiness than Booster 4 once stacking is complete. Booster 4, on the other hand, required at least several more weeks of outfitting after SpaceX briefly rolled the rocket to the orbital launch pad for a full-stack photo-op and fit check.

Based on B4, that final stack could happen just a few days from now, though there are signs that it might take B5 a fair bit longer. Notably, whereas Booster 4’s aft liquid oxygen (LOx) tank was already fully stacked by the start of grid fin installation, Booster 5’s LOx section is still waiting on its thrust dome. That thrust section was most recently spotted inside a production tent on October 11th – far more thoroughly outfitted than Booster 4’s aft but awaiting installation nonetheless.

That slight difference in timing pales in comparison to a massive tube that may or may not have been installed inside Super Heavy B5 late last month and that definitely wasn’t installed in B4. Without official information, it’s hard to know for sure, but the general community consensus is that this new tube (possibly one of two installed inside Booster 5’s LOx tank) is some kind of header tank or sump meant to collect propellant for Super Heavy’s boostback and/or landing burn.

If SpaceX really is adding header tanks to Super Heavy, it would drastically increase the complexity of booster plumbing, potentially explaining why Super Heavy B5’s thrust section installation is taking longer than B4. Only time (and hopefully a tweet or two from Musk) will tell.