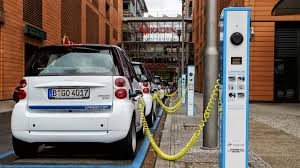 Above – Electric Car at Norway

There has been a steady increase in electric and hybrid cars over the last decade in the US but still only 2 percent account for new car sales in the US. Americans still love their air-polluting and smog-producing gas guzzlers. Most people do know and feel that if we drive electric cars we could reduce the consumption of oil and could reduce pollution. It is seen only one third is taking step to buy at any point of time. Some are still not yet sure to make a plunge in purchase.

In comparison with Norway, a country that is considered to be an unofficial leader in Electric Vehicles, around 40 percent of vehicles sold are electric vehicles and there are thousands of drivers who are on a waiting list to purchase the latest electric vehicles. This has been the trend for the last 30 years. So how did this happen?

Norway, a small rural country having a population of only 5 million has been steadily building electric cars. In comparison, in 2018 US and China had a total combined sales of 1.2 million (360,000 of them being plug in hybrids). To date Norway has the highest number of EV purchases in the world.

The reason for this is because Norway has got the reputation of being a nature loving, environmentally friendly population and their cultural acceptance of  electric cars has always been favored over gas cars.

Norweign governments that came into power do implement economic benefits for electric vehicle owners as a part of reducing gas emissions. There has been a growing increase of electric vehicles in terms of speed, aesthetics, range, style etc. As a result, buyers are using the perks which they get to convert to cash.

In Norway, most cars are imported. 25 per cent consumption tax that is charged on most consumer goods are extra charged with purchase tax. But this was removed in 1990 for electric vehicles. Buyers of EV became exempted from paying VAT in 2001.

But recently due to outbreak of COVID-19, sales of electric vehicles have been affected with the consumer markets being shaken and oil prices being plunged to high. According to the news report, EV sales will reduce in 2020 and one of the factor is global uncertainity, making people less adapt to change in technology that is new.

There has been a small hope for UK customers as it is found that air quality has improved in the country due to maximum people staying back at home and it has generated new interest among consumers in buying electric cars.

On issues related to charging facility which most countries like US, Sweden, Canada do face, Norway is far ahead of them. You could find charging points and electric supply on an increasing level with the availability of  having one charging station every 31 miles at highways, by offering subsidies to these providers inorder to increase the installations. By 2017, the number of stations increased to 300 from 2014.

Norway is the first country to introduce supercharger points at places where you can find more than two dozen vehicles can be charged at a time. Oslo, capital of Norway is working with cooperative societies to install points outside homes of people and it has provided them with facility of wireless charging for taxi’s too.