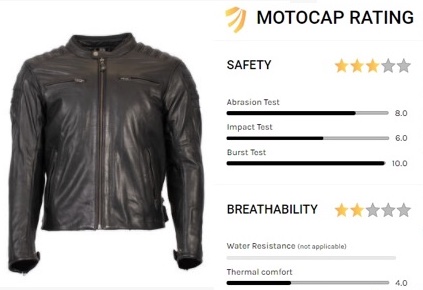 With the hotter weather approaching, riders can check the breathability standard of their gear on Australia’s internationally awarded MotoCAP online safety ratings service.

Importantly, they also test the breathability and comfort of the gear in hot conditions which is an important primary safety factor.

The Richa Daytona 2 leather jacket performed best, receiving three out of five stars for safety yet two out of five for breathability.

MotoCAP has now performed testing and issued safety and comfort ratings ratings for 356 items of rider jackets, gloves and pants.

The MotoCAP safety intitiative launched in September 2018 and is the first of its type in the world.

Riders are urged to consider checking the safety and comfort ratings of gear before they buy.

While some have disputed the veracity or usefulness of the tests, rider representative groups and road safety experts say MotoCAP at least makes riders more aware of wearing protective gear.

The breasthasbility score also shows how the gear may perform when out on the road, something you can’t test for when trying it on in a store.

Testing is carried out by the Deakin University Institute for Frontier Materials on behalf of the MotoCAP partners.

All gear rated so far has been obtained through a secretive buying system to guarantee integrity.

The post How will your rider gear cope this summer? appeared first on Motorbike Writer.


Go to Source of this post
Author Of this post: Mark Hinchliffe
Title Of post: How will your rider gear cope this summer?
Author Link: {authorlink}